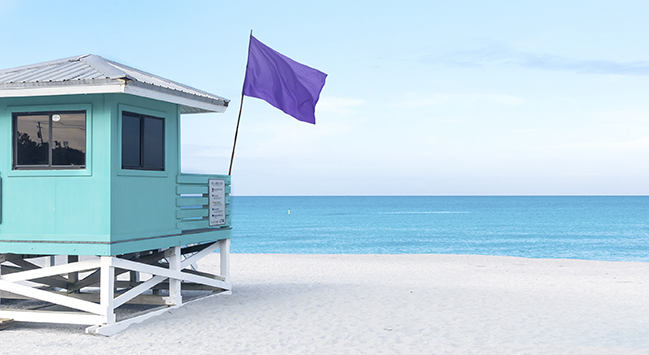 Only locals would know…

The “Sunshine State” has so much to offer visitors and residents besides​ abundant sunshine, warm weather and beautiful coastlines.

South Florida remains a popular destination for celebrity watchers, great restaurants and nightlife and the Florida Keys are the perfect tropical getaway. If you are planning to visit South Florida beaches, make sure you are aware of what the flags mean.

You might not want to jump in the water when it’s infested with jellyfish, when there is a high surf or when currents are so strong that not even a professional swimmer could overcome them.

South Florida’s beaches use a uniform flag warning system to alert the public of potential safety risks. The flags are color-coded rather than printed with written messages. This is due, in part, to many tourists and locals that are not fluent in English, and also because colors can be easily seen from a distance when words cannot.

According to the local government, the flag color meanings are as follows:

Red flags with a “no swimming” symbol indicate that the water is closed to the public. This includes swimming, boating, surfing, fishing, and wading.

Red flags without a symbol indicate a high hazard from surf and/or currents. While not recommended, swimming and surfing are still permitted if there is a red flag present. However, you should use extreme caution and only go in the water if you are a very strong swimmer.

Green flags indicate a low hazard with calm conditions, but beachgoers should still exercise caution, especially when children are present.

Blue or purple flags indicate a hazard from dangerous marine life, such as a high concentration of poisonous jellies, stingrays, or sharks. These flags are used in conjunction with a red, yellow, or green flag that indicates the current surf/current conditions.

Now that you know what the flag warning system means, go and enjoy South Florida Beaches.

According to the Miami Herald these are the best South Florida beaches in Miami-Dade, Broward and The Florida Keys.

Where: On A1A from 163rd Street to the Broward County line

Details: William Lane’s new exuberant, Deco-styled pavilion at 163rd Street revisists Sunny Isles Beach’s 1950s-futurism, even though the kitschy area motels are rapidly falling victim to condo creep. Few amenities here, but the beach is fine, and only locals know about it. As for Golden Beach, forget it. That’s for residents only.

Details: This long, sloping beach would be rather unremarkable save for one thing: The northernmost section is clothing optional. Otherwise, it’s a somewhat run-down and rugged beach that could use a little refurbishing. Other than serving as Miami-Dade’s only legal haven for nudists, Haulover offers the usual amenities: picnic area, showers, lifeguards and concession stands.

Where: From 87th Terrace to 96th streets

Details: A wholly unpretentious area with a walking path, dunes and no clutter.

Where: On A1A and 72nd Street in Miami Beach

Where: Between 22nd and 46th streets behind the hotels.

Details: The appearance of luxury hotels – Faena, Soho Beach House and Edition, among others – has transformed this beach, which once had a distinct lack of ambiance. You can stroll the boardwalk, but you’re probably not going to come here unless you’re staying in one of the hotels.

Where: Along Ocean Drive from the Government Cut area to about 22nd Street.

Crowd: Anything goes – and does.

Details: The ocean is still the best thing South Beach has to offer. You’ll see tourists and natives here. The natives are usually riding bikes, Rollerblading or running along the path that winds all the way down to South Pointe Park Pier. The fitness-minded work out on the equipment in Lummus Park at Ninth Street,

Where: On Key Biscayne south of the Seaquarium (4000 Crandon Blvd.)

Details: It has a long stretches of soft sand for spreading the towel out and soaking up the sun. Palm trees dot the sand and make shade. This is actually the perfect beach for families. There are lifeguards, some concessions and picnic areas with tables and grills.

Where: End of Key Biscayne.

Details: The well-shaded beach and park is beloved by families who spend weekends at the plentiful barbecue grills and picnic tables, play areas and restrooms. For those seeking serenity, this is one quiet spot to absorb nature. Cape Florida, located at the farthest end of Key Biscayne offers 1.25 miles of sandy beach. Bring along the snorkel and fins, because there’s lots of interesting sea life a few yards away from shore.

Crowd: Families, on the young side.

Details: This isn’t really a beach per se, but it boasts a man-made atoll pool that gets its waters from the tides sweeping Biscayne Bay. The bottom is rather slimy and murky but the surrounding park is lovely and families love it here for good reason. There are picnic pavilions and nature trails.

Crowd: Families hunkering down around the BBQ.

Where: Southeast 10th Street to the Palm Beach County line.

Details: A 980-foot pier at the north end provides a great spot to fish (or watch other people fish). Surfing is allowed on the north side of the pier, and volleyball courts are available.

Details: This big, broad beach has the staples: picnic areas, playground, volleyball courts and parking. It also boasts a municipal pier with a snack bar. Fish from the pier. You can rent a pole; the nearby tackle shop sells bait. Surfers can do their thing north of the pier. Rent water equipment or launch your own – launch area is Northeast 16th Street.

Where: At Commercial Boulevard.

Details: Feel like you’re on vacation even if you live 10 miles away. The town is full of Old Florida-style shops and restaurants, offering ice cream, seashell wares and food served al fresco. Cute motels and Anglin’s Fishing Pier add to the charm. There are no lifeguards, so swim at your own risk.

Where: From Harbor Beach north of Port Everglades Inlet to Oakland Park Boulevard.

Details: Starting from the south: Harbor Beach, between Port Everglades Inlet and the 17th Street Causeway, boasts powder-soft sand but access is tricky, with no parking in sight. Instead, walk or bike or stay in one of the hotels that front the beach. Families cluster south of Las Olas Boulevard, near the playground and picnic tables, as well as volleyball and basketball courts and equipment rentals. More action awaits just north of Las Olas Boulevard, with the landmark Elbo Room, bars, restaurants, shops, bikers, in-line skaters and that lovely beach wall. At Sunrise Boulevard, Hugh Taylor Birch State Park has a tunnel to the beach; here you can picnic, camp, bike, canoe and more. Serenity reigns as you head north to Oakland Park Boulevard: no shops, no tourists (well, fewer tourists) and also, inevitably, scarce parking.

Crowd: People who prefer wetlands to hotels and t-shirt shops as a beach backdrop.

Details: The 251-acre park, adjacent to Port Everglades, offers a subtropical coastal hammock with nature trail, wetlands area, picnicking, kayak and canoe rentals and a boat ramp. It sits between the Atlantic and the Intracoastal Waterway.

Crowd: Folks who love the beach, but not the crowds.

Details: Despite its location near Fort Lauderdale-Hollywood International Airport, Dania Beach is a quiet little jewel with a fishing pier, tiki-style huts and soft sand. If you get hungry, there’s a Quarterdeck restaurant on the pier.

Where: North of Hallandale Beach Boulevard; North Beach Park is at Sheridan Street.

Crowd: Families, couples, exercise buffs and, when the season is right, snowbirds from Quebec.

Details: Hollywood offers a beach for everyone. Want to sunbathe against a backdrop of faded glory? Stake out some sand in front of the old Hollywood Beach Resort at Hollywood Boulevard. Want to shop, bike, eat, people-watch or hear a beachside concert? Hit the Broadwalk; the band shell is at Johnson Street. Want to take the family out for a nature-friendly day in the sand? Try North Beach Park at Sheridan Street, where a sea-turtle hatchery adds an eco note to the fun. The north and south ends of Hollywood Beach are comparatively quiet and uncrowded, with peak activity around the giant Margaritaville resort, which towers over the smaller mom-and-pop motels and businesses.

Details: The landmark beach ball water tower stands guard over the county’s southernmost shores. So do the condos. The beach offers bocce ball courts as well as showers, lifeguards, a playground and concession stands.

Where: Near the south end of White Street on Atlantic Boulevard in Key West.

Details: This beach is on the small side, but includes picnic shelters and a pier.

Where: On South Roosevelt Boulevard west of the airport in Key West.

Details: A long stretch of sand populated with palms, the beach is a nice place to seek refuge from the excesses of Duval Street. Volleyball nets beckon, as do rental options for water sports.

Where: Between Mile Markers 36 and 37 on Bahia Honda Key.

Details: You can do just about anything here. Stay overnight in a cabin or tent and wake to the golden sunrise. Swim in the Atlantic or the Florida Bay. Wade through shallow, crystal-clear water. Ride a bike. Boat, fish or just park yourself on the attractive sand and relax.